The Panzer III of Petite Infanterie was built to consider all the versions which have existed. Indeed, three type of turrets were built sporting the 37 mm, 50 mm and 75 mm guns. Eventhough, it was not sufficient to keep it in the front line as quoted in Wikipedia:


"It was intended to fight other armoured fighting vehicles and serve alongside and support the Panzer IV; however, as the Germans faced the formidable T-34, more powerful anti-tank guns were needed, and since the Panzer IV had more development potential, it was redesigned to mount the long-barrelled 7.5 cm KwK 40 gun. The Panzer III effectively became obsolete in the anti-tank role and was supplanted by the Panzer IV. From 1942, the last version of Panzer III mounted the 7.5 cm KwK 37 L/24, better suited for infantry support"

Your comments are always welcome!

The German 88 mm is maybe the most famous gun of WWII.

That's why Petite Infanterie badly need to have it in the line-up.

Its ancestor was developp at the end of WWI.  It was improved during the Twenties  (in the Krupp swedish unit because of the Versaille treaty) and  in the Thirties (under Nazi rearmament program).

It is known that it was built as a anti-aircraft gun.  What it is less known is the gun had, from the beginning, sights aimed at ground target fire.  The gun was designed as multi-purpose weapon.  It was first used against tanks during the Spanish civil war and very successfully during WWII where it became famous.


Why showing WWI heavy howitzers in a blog on WWII?

It's simple!  Time to time, it is fun to do quick projects not inspired by real machines.  It's a luxury which is allowed by scratchbuilding.  And at the end of the day, we don't realy care if it is WWI or WWII.  Fun is more important!

The following guns are pretty simple. They do look like WWI howitzer though.

They were made on a periode of a couple of year.  Some, at the very beginning of our journey into 1/32 war gaming 13 years ago.


We could have show more heavy WWI howitzers.   I hope you have appreciate those examples.

You comments are always welcome.


I decided to make more gun barrels to equip 4 Wespe. Here some historical facts about that tank quoted from Wikipedia:

"In 1940, during the Battle of France, it was apparent that the intermediate tank of the German forces, the Panzer II, was unsuitable as a main battle tank. Though mechanically sound, it was both under-gunned and under-armoured. The chassis, however, proved servicable for providing mobility to the 10.5 cm field howitzer.

The design for the Wespe was produced by Alkett, and was based on the Panzer II Ausf. F chassis (...) Amongst other modifications to the Panzer II, the engine was moved forward and the chassis was slightly lengthened to gain sufficient space for the rear-mounted 10.5 cm leFH 18 howitzer. The superstructure was lightly armored, with 10 mm armor plate (enough to stop small arms fire) and was open at the top and to the rear. The vehicles were produced by FAMO's Ursus plant in Warsaw.

The Wespe was in production from February 1943 until June 1944, when Soviet forces approached the frontier. By that time, 676 had been produced. An additional 159 were modified to serve as mobile artillery ammunition carriers.[1] "

To have a Sd.Kfz. 251 in 1/32 scale was key to be able to build Petite Infanterie Panzer divisions. Having built mostly Panzer III and IV, we clearly needed armored vehicules for our panzergrenadiers.

"The Sd.Kfz. 251 (Sonderkraftfahrzeug 251) half-track was a WW2 German armored fighting vehicle designed by the Hanomag company, based on their earlier, unarmored Sd.Kfz. 11 vehicle. The Sd.Kfz. 251 was designed to transport the panzergrenadiers (German mechanized infantry) into battle. Sd.Kfz. 251s were the most widely produced German half-tracks of the war, with at least 15,252 vehicles and variants produced by various manufacturers, and were commonly referred to

simply as "Hanomags" by both German and Allied soldiers.[1]"


Petite Infanterie needed a Panzer IV in is line-up.  Why? The Panzer IV could be considered the most important german tank of WWII.


As summarize in Wikipedia:


"The Panzerkampfwagen IV (PzKpfw IV), commonly known as the Panzer IV, was a German medium tank developed in the late 1930s and used extensively during the Second World War. Its ordnance inventory designation was Sd.Kfz. 161.

The Panzer IV was the most widely manufactured German tank of the Second World War, with some 8,500 built. The Panzer IV was used as the base for many other fighting vehicles, including the Sturmgeschütz IV assault gun, Jagdpanzer IV tank destroyer, the Wirbelwind self-propelled anti-aircraft gun, and the Brummbär self-propelled gun.

The Panzer IV saw service in all combat theaters involving Germany and was the only German tank to remain in continuous production throughout the war. Upgrades and design modifications, intended to counter new threats, extended its service life. Generally, these involved increasing the Panzer IV's armor protection or upgrading its weapons, although during the last months of the war, with Germany's pressing need for rapid replacement of losses, design changes also included simplifications to speed up the manufacturing process."


To be able to cover all the evolution of the Panzer IV during the war, my brother built two types of turrets.  One with the short 75mm and one with the long 75 mm barrel.

Here a couple of pictures of the making of the Panzer IV.  It's not a tutorial ( I know, I know, maybe next time).

To be sure that our Panzer IV would be acccurate and at scale, we used George Bradford's book: German early war armored fighting vehicule 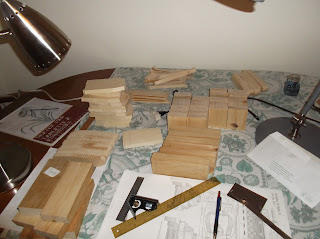 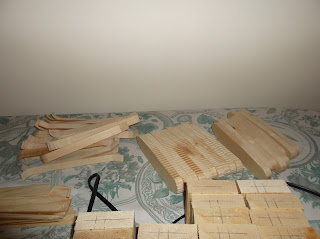 Panzer IV, being among its infantery men

The mighty KV1 was the most powerful heavy tank of the early war period…on paper.

Even though the Germans were badly surprised at first, the KV was never in a position to hold back the invasion of Russia.


As quoted in Wikipedia: 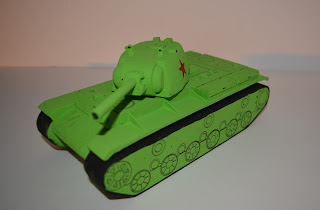 The KV's strengths included armor that was impenetrable by any tank-mounted weapon then in service except at point-blank range, that it had good firepower, and that it had good traction on soft ground. It also had serious flaws, all of which were rectified with the introduction of the KV-1S: it was difficult to steer, the transmission (which was a twenty-year-old Caterpillar design) was unreliable (and was known to have to been shifted with a hammer), and the ergonomics were poor, with limited visibility and no turret basket. Furthermore, at 45 tons, it was simply too heavy. This severely impacted the maneuverability, not so much in terms of maximum speed, as through inability to cross many bridges medium tanks could cross.

My brother chose to make the 1941 model with the cast turret. 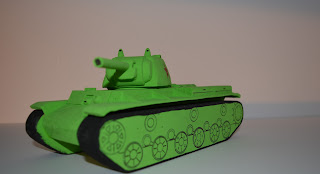 To do the work, he used George Bradford series World war II AFV plans.  The book Russian Armored Vehicles provided scaled plan of the KV.  It helps a lot to represent all the details of that tank.

Eight were built in two colors.